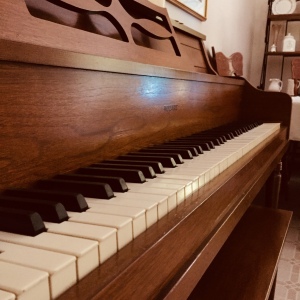 I am not a musician, but I have always wanted to be. Simply because musicians can make people feel things instantly.

My parents recently inherited my great-mother’s piano. It was the piano my father grew up playing and it was the piano, aside from the one in my own house, that my siblings and I used to bang on whenever we visited my grandparents. Growing up, the piano in my house was always well-used, thanks to my father. Stories of his stint as a talented teenage pianist, travelling with bands from summer camps to churches to prisons, will still randomly come out at family get-togethers (or if Dad and I are alone and there is too much silence). My grandmother and my aunt are also wonderfully musical. When I began writing as a young girl, I knew it was only a matter of time before music became one of the main threads in one of my stories.

If summer was the first spark of inspiration for Reeds & Wicks, then the second was, of course, music. In fact, there remained a giant hole in the book for a few years until a friend introduced me to a musician I had never heard before, and like magic, the book finished itself, better and stronger than ever. That artist was Strahan. “You’re the Dawn”, “Deliverance” and “Vineyard” from his album, Posters, are my favourites. This is “You’re the Dawn”. I can’t listen to it without getting swept away.

Hudson Taylor’s EP Battles embodies so much of John Luke’s emotions, most of which he doesn’t realize are there until the end of the book. “Walls” by Gideon Grove is a soft, strong song that just sounds like John Luke’s thoughts. Same with “Stars and Satellites” by Dan Griffin. Plus, anything by NEEDTOBREATHE. And I mean anything.

Then there is Johnny Flynn and John Fahey. Johnny Flynn’s album A Larum helped me shape my first serious attempt at serious writing way back when I was a baby (17, actually). He basically changed my life forever (no big deal), but that’s another story. Literally. One I hope to share with you one day. So, if Strahan helped me finish R&W, then Johnny Flynn helped me start it. This is “Leftovers”.

Nate credits his discovery of his love of music in Mr. Rickshaw’s music store after listening to a record by American fingerstyle guitarist John Fahey. Here is “In Christ There is No East or West”.  Keep listening. 1:11 is when I just get so happy.

Mumford & Sons’ album Sigh No More is one of my favourite albums still to this day because of the lyrics. Such poetry. I must include this video of “Roll Away Your Stone”.

“Madelyn and the guys sang “Georgy Girl” by The Seekers, an Australian pop group from the sixties, just to annoy Ross. When he and Dad were in the seventh grade, their school put on a musical, featuring songs by the band. Ross wanted the lead, but it went to Dad instead. To this day, I still hear Dad singing the songs under his breath while completing chores around the house.”

True story. When my dad was in 7th grade, he starred in a school musical, featuring songs by the Australian band, The Seekers. To end this letter dedicated to the music behind Reeds & Wicks, I have to include this awesome video of the band performing in 1967.